How to BABSCon (2019 Cyberpony Edition!) 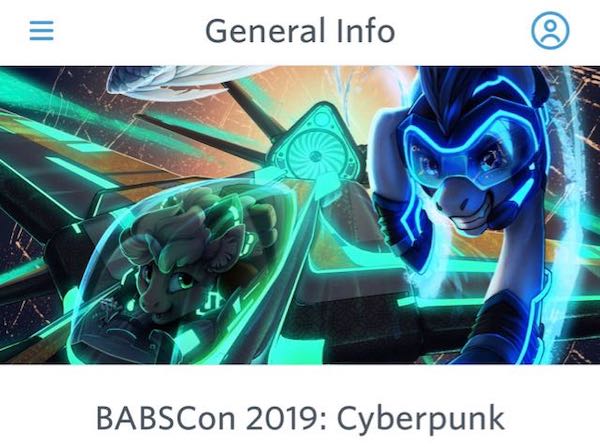 Jack in, console cowpokes, 'cuz we're twenty minutes into the future. BABSCon is about to begin, so deck your avatar out in your finest swag and let's hack the Gibson. But first, you need to know a few things!

Tags: how to babscon 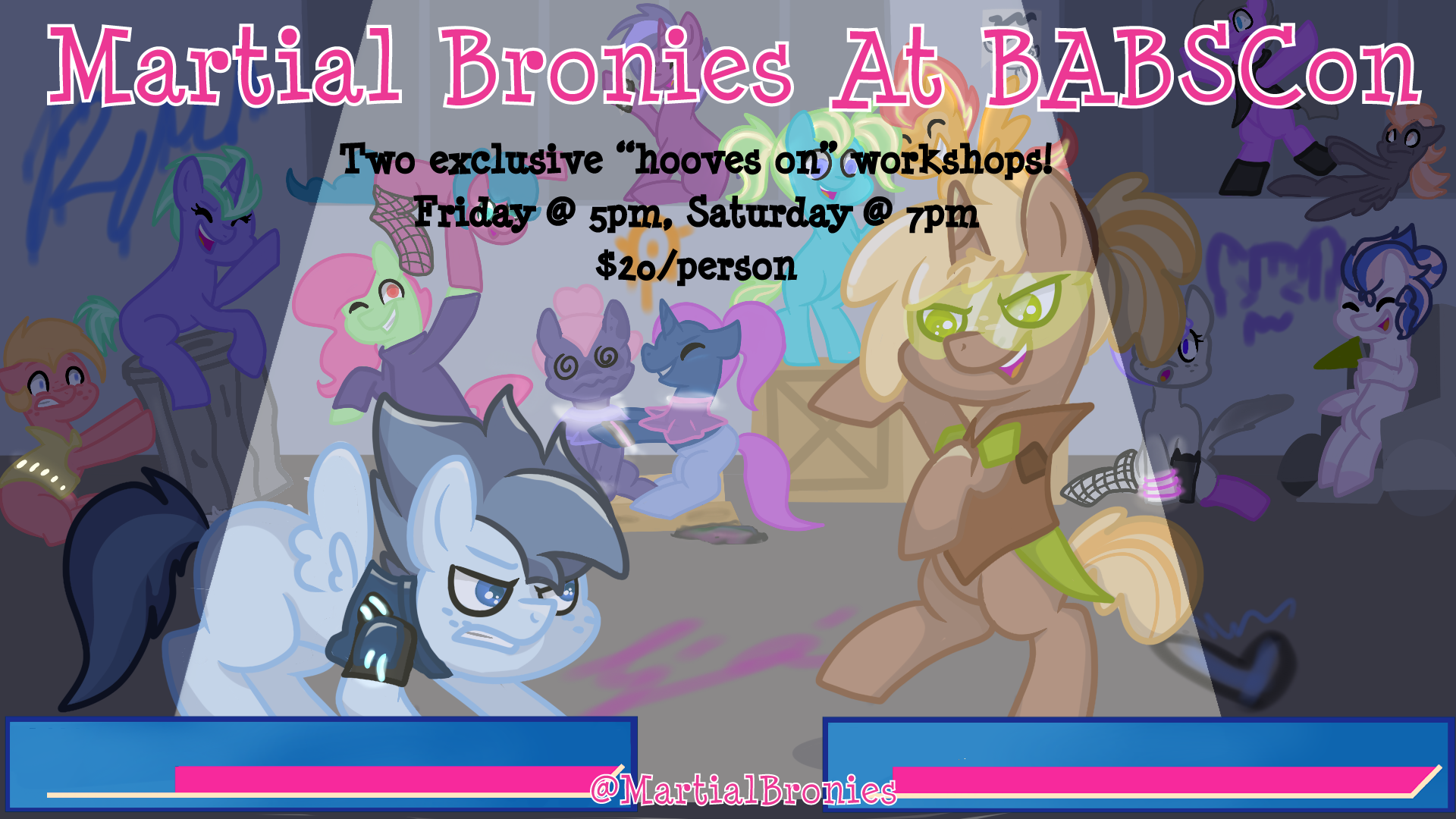 Join instructor Solid, a certified 3rd generation Jeet Kune Do practitioner, in a “hooves on” workshop introducing some of the moves and philosophy behind the practice. Welcome special guests representing skills from their own respective traditions, Fire Wing (Shaolin Kenpo) and Professor Smiley (Wing Chun).

This special ticketed event will be held on Friday at 5pm and Saturday at 7pm. Spaces are limited, but you can sign up for both times! Each session runs for 60 minutes. The BABSCon registration site has the add-on for this event so that you can signup and pay in advance. 10% of proceeds will go to this year's charity!

Details of the workshops are as following

Note: Participants must be at least 18 to participate. A release waiver will need to be signed at the workshop. While no martial art experience is required, attendees please do make sure that moderate exercise is within physical capacity, consult physician if needed, see waiver for details.

To join in: Check your registration confirmation for a link to edit your badge, or of you haven't yet registered, check out the Add-on section after selecting your badge type! If you're having trouble, feel free to reach out to us at workshop@babscon.com and we can help get you squared away. 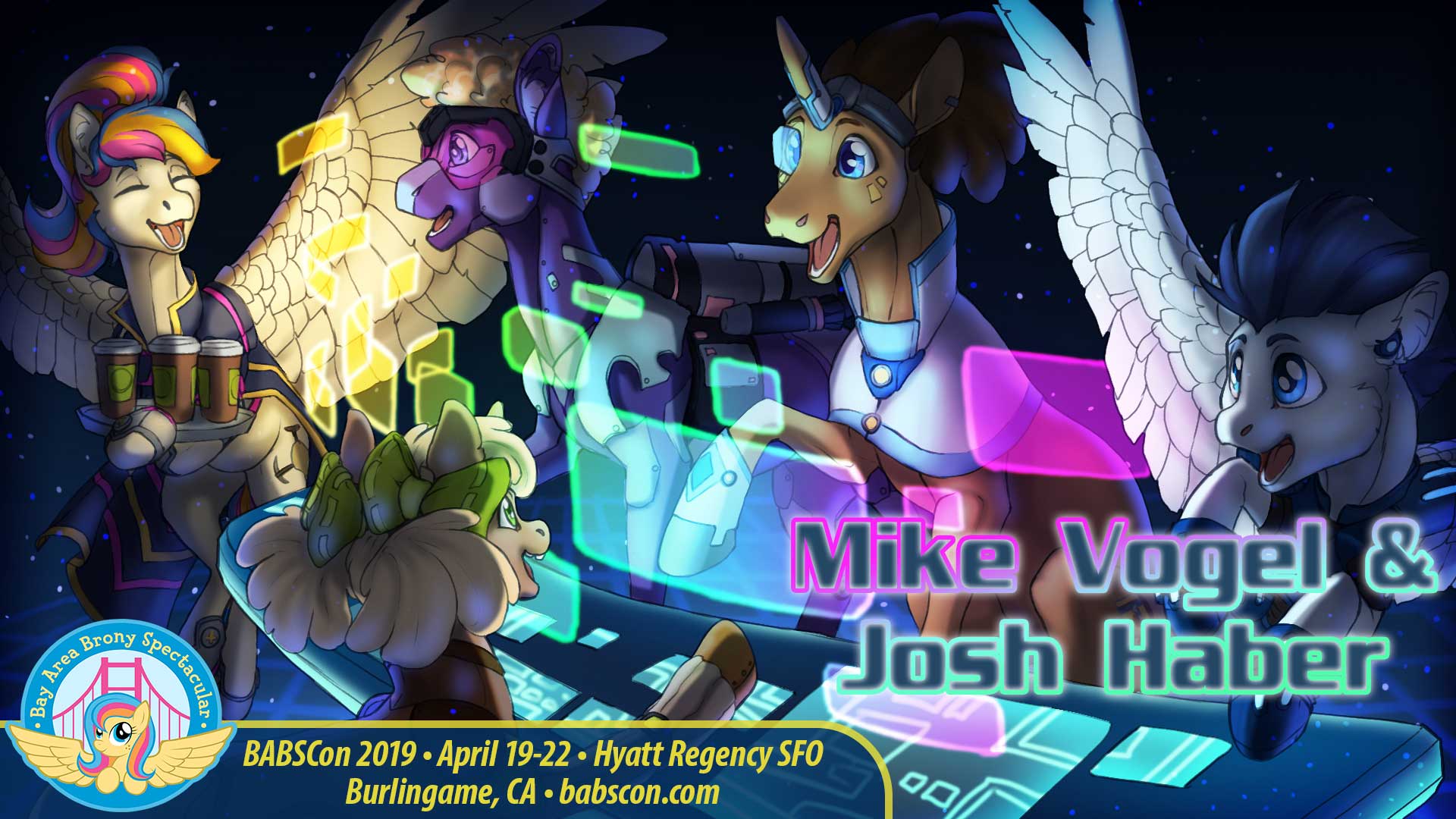 Well, well, well…looks like we decided to make our last Guest of Honor announcement for BABSCon 2019 a juicy one! Two giants of MLP storytelling will be gracing us with their presence: Mike Vogel and Josh Haber.

Mike, once Hasbro’s VP of Development, had an epiphany during a visit to Burning Man that he wanted to be a creative again, so he joined the writing corps for My Little Pony: Friendship is Magic and related titles in Season 6. Highlights include co-writing My Little Pony: The Movie; the episodes “A Hearth’s Warming Tail,” co-writing “Stranger Than Fan Fiction” with Josh Haber, “To Where and Back Again,” “School Daze,” and the “Best Gift Ever” special. And, oh yeah, he’s also written several MLP storybooks and is half of Ponyville Mysteries writing duo called Penumbra Quill with fellow Guest Nicole Dubuc.

Josh joined the MLP writing room in Season 4 and quickly rose through the ranks, becoming Story Editor (animation-speak for “showrunner”) in Season 6, also co-editing Seasons 7-8. Some of his best include “Castle Mane-ia,” “The Cutie Re-Mark,” “The Crystalling,” co-writing “To Where and Back Again” with Mike Vogel (what a team!), “Shadow Play,” “Road to Friendship,” part 2 of “School Raze,” and Equestria Girls: The Friendship Games. True story: BABSCon’s first event in 2014 was Josh’s pony con debut.

You don’t want to miss all the fun with these amazing folks, so register now, grab a sponsor badge for even better access and cool swag & perks, book your hotel room (or check our Discord for room- and ride-shares), and prepare to party by the Bay! 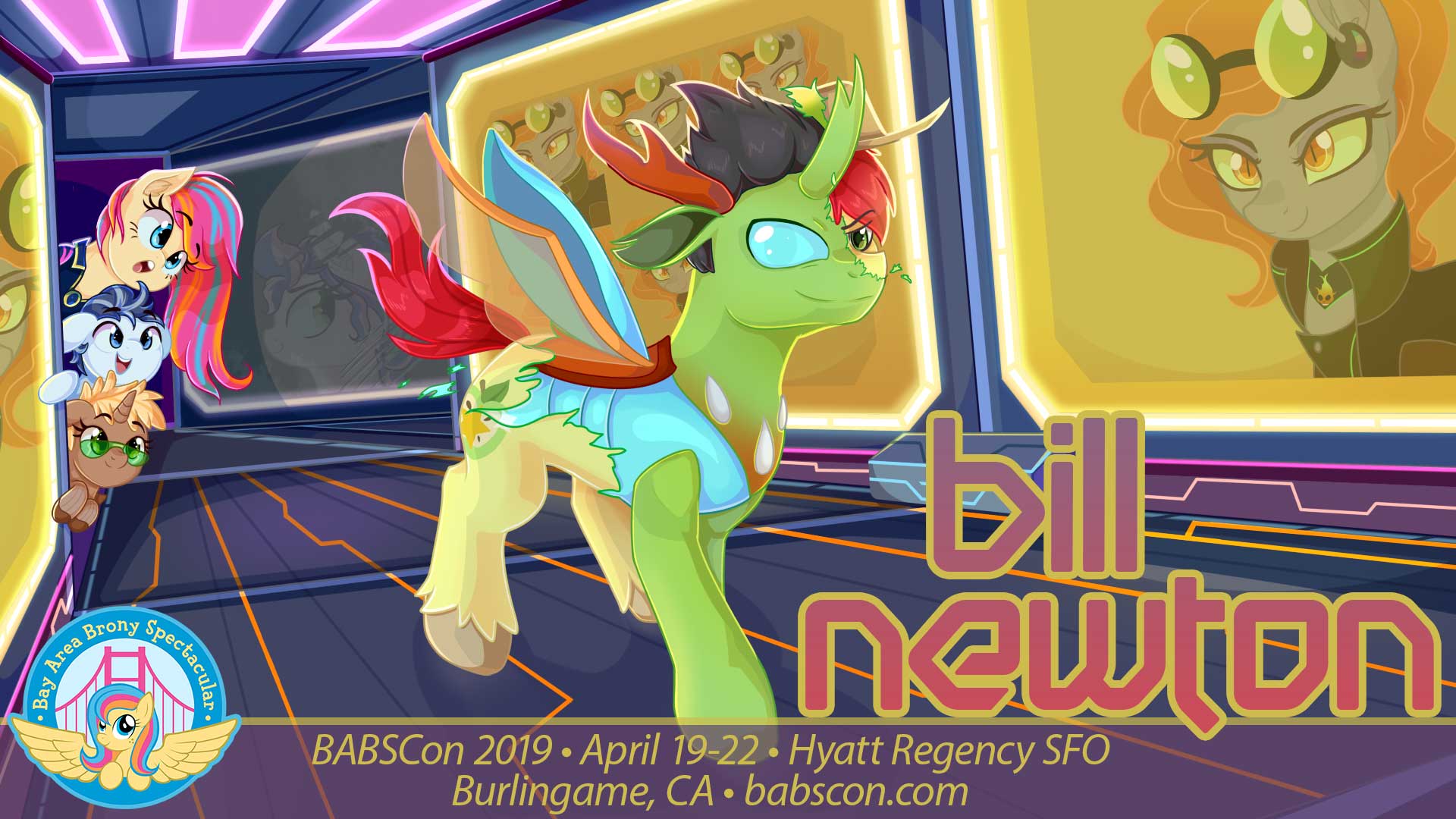 He’s one of the most dynamic recent additions to the My Little Pony: Friendship is Magic voice cast. He’s one of the most popular new personalities on the pony con circuit. He’s charming. He’s sweet. He has the most delightful Aussie accent. And he’s making his triumphant return to BABSCon. He’s Bill Newton!

Known to MLP fans as Applejack’s dad, Bright Mac, grumpy changeling Pharynx, and the big bad Pony of Shadows, but Bill’s been making a splash since his debut in the voice acting industry. Some of his roles have included Toby in the Minecraft miniseries, Challenge of the Spooky Isles and Mystery of the Greek Isles, Zac the Sunrise on Beyblade Burst, Simon Puggerson on Littlest Pet Shop: A World of Our Own, and more. He’s also mighty entertaining when streaming on his Twitch channel and on Twitter.

So register now—maybe get one of our remaining sponsor badges if you can for the optimal BABSCon experience—book your hotel room, and come play with us this April 19-22! 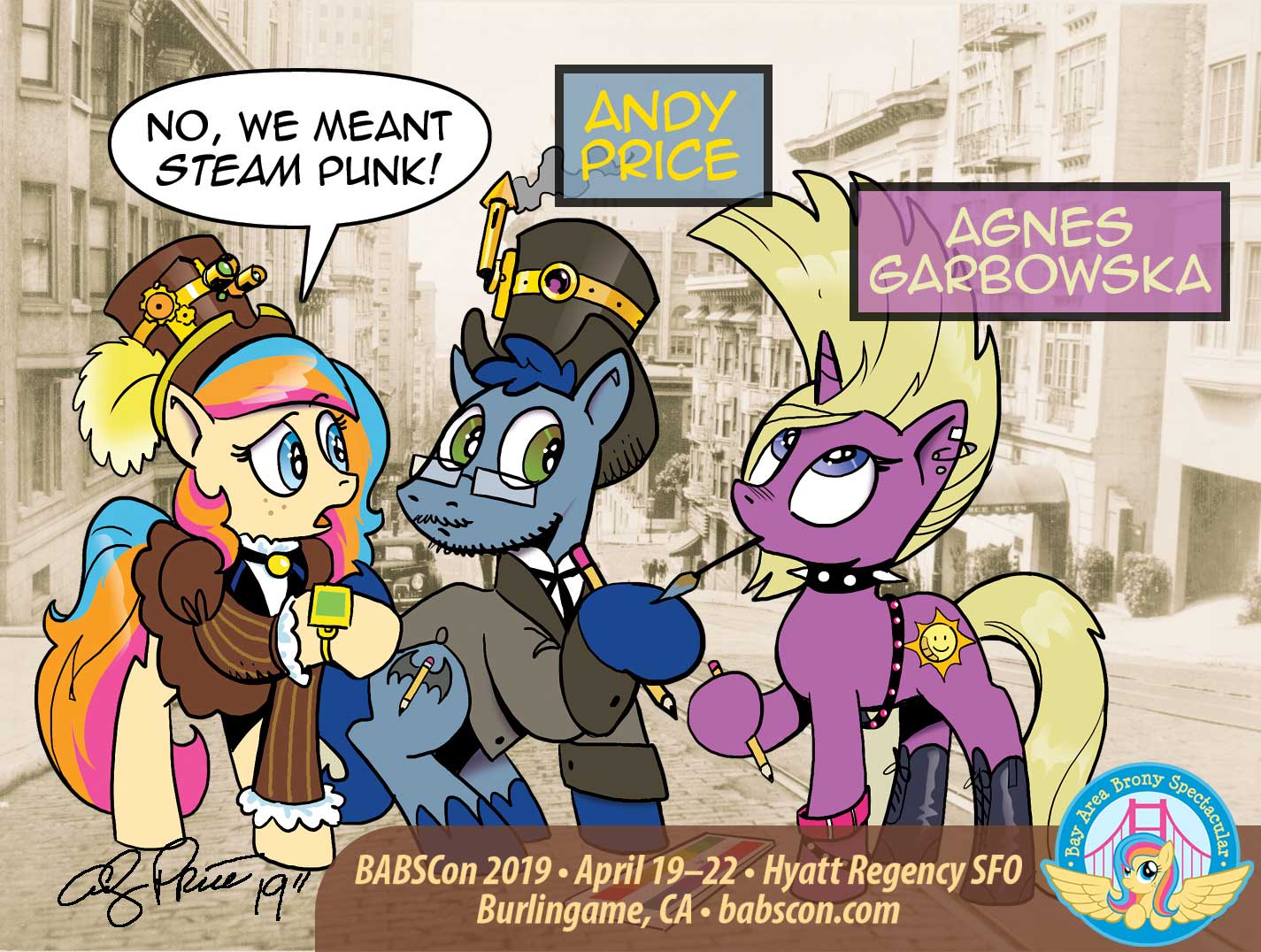 Bet you didn’t think we could make our big picture any prettier. But if you thought that, you would be so very wrong, as two of IDW’s most exciting artists join us as our Guests of Honor this April. Andy Price is a perennial favorite at BABSCon, while it’s Agnes Garbowska’s first visit to our little shindig by the Bay.

Andy, the all-star original artist on the My Little Pony comics lines is making his triumphant return! In addition to working on every single My Little Pony comics property from IDW starting with the very first arc, Andy Price has also lent his creative talents to Archie Comics. Point of fact, he’s teamed up with fellow MLP Comic Creative Katie Cook for a brand new adventure starring Sabrina the Teenage Witch!

Agnes can only be called a newcomer to the world of MLP comics compared to Andy…she’s also provided the interior and cover art for a wide selection of issues in virtually every IDW MLP title. But she’s also worked on such diverse titles as DC Superhero Girls, Jem and the Holograms, and the tastiest spider-person of all: Spider-Ham. She’s done covers for far more comics, including Sonic the Hedgehog, Transformers, GI Joe, Powerpuff Girls, Samurai Jack, and Dexter’s Laboratory.

With a guest list like that, you’re going to want to register now—maybe grab one of the remaining sponsor badges while they last—and book that hotel room. We might have so much fun that we (gasp!) color outside the lines!