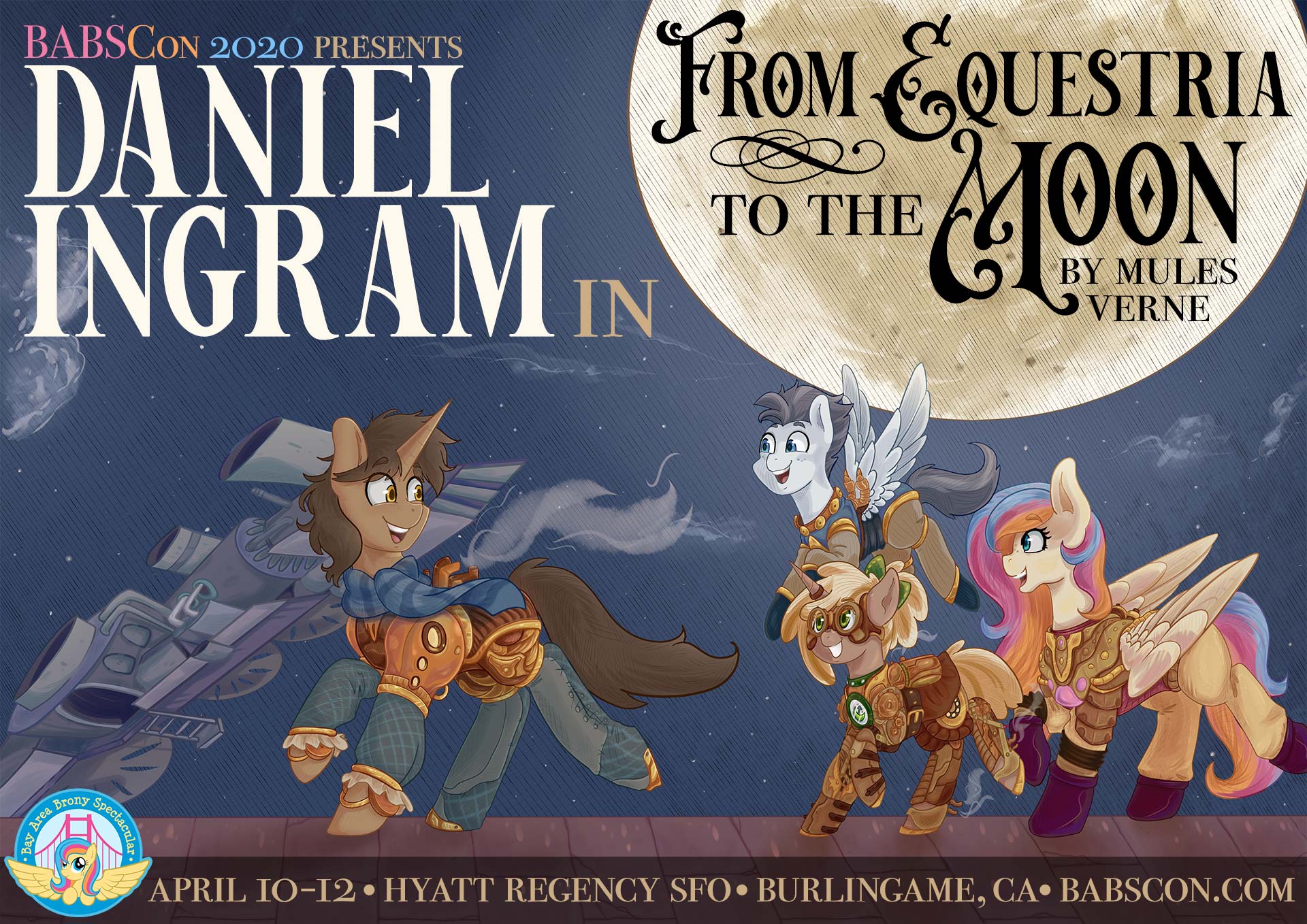 He writes the songs that make the pony world sing and composes the very Music of the Spheres™.  His cosmic talent know no bounds, and he’s going to be joining us at BABSCon 2020 this April 10–12. He’s the one and only Daniel Ingram, and you can see him for 15% off if you register this weekend with promo code BLACKFRIDAY!

It is impossible to overstate Daniel’s impact on the My Little Pony franchise. He wrote every single song in Friendship is Magic, Equestria Girls, and My Little Pony: The Movie. All of Them. From “Apples to the Core” to “Winter Wrap-Up,” from “Awesome as I Want to Be” to “Welcome to the Show,” it’s all him. Every time you’ve belted out “The Smile Song” or “Hearts as Strong as Horses,” you should be thanking him if you aren’t already. Oh, and he also worked on a few other little shows like Littlest Pet Shop, Martha Speaks, and others. No big thing.

Oh yeah…he did say something about bringing a brand new, never-before-heard track to BABSCon, too.

Daniel joins our other Guests of Honor: Nicole Oliver, Grey DeLisle-Griffin, Peter New, and Gail Simone, with many more yet to come!

So, if you’ve been waiting to register for BABSCon, now’s the time since you get 15% off any level of membership—even our swanky sponsor tiers—with promo code BLACKFRIDAY until the end of Cyber Monday. Then book your room and be ready for fun April 10–12 at BABSCon…and BEYOND! 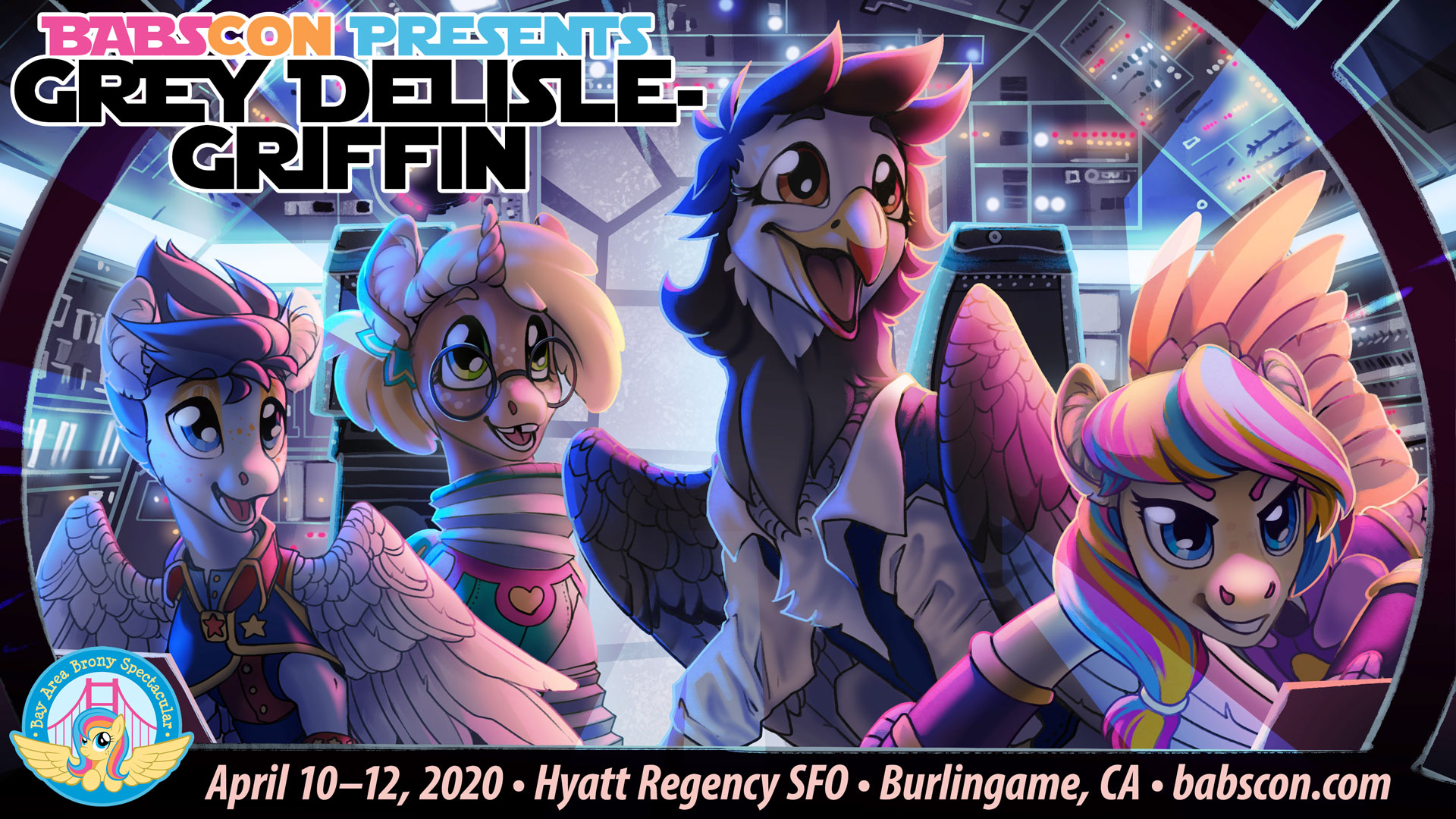 BABSCon is truly embracing the spirit of “…and BEYOND!” this year by bringing its My Little Pony fans an unusual, but nonetheless stellar, new guest. We present to you a true Rebel Princess of voice acting: Grey DeLisle-Griffin!

To call Grey a star of animation doesn’t do her justice. Roles such as Azula in Avatar: the Last Airbender; Asajj Ventress and Padmé Amidala in Star Wars: Clone Wars; the titular Mandy on The Grim Adventures of Billy & Mandy; Lana, Lola, and Lily Loud in The Loud House; and the iconic Daphne Blake in Scooby-Doo (since 2000), plus her over 1,500 other roles, should be enough to cement her bona fides. “But why invite her to a con focused on Friendship is Magic?” we hear you ask.

In part, because a VA of her stature loved MLP so much, she freely donated her voice to the fan animation, “Epic Rage Time,” as Derpy. In part, because she’s BFFs with Tara Strong and has worked so often with folks like Tara, Lauren Faust, and others that she’s practically family: Wonder Woman in DC Super Hero Girls to Tara’s Batgirl & Harley Quinn (creator: Lauren Faust, story editor: M.A. Larson, with episodes by G.M. Berrow & Cindy Morrow), Frankie Foster in Foster’s Home for Imaginary Friends (produced & story-edited by, and character based on Lauren Faust), evil babysitter Vickie to Tara’s Timmy Turner in Fairly Oddparents, Puppycorn to Tara’s Unikitty in Unikitty, twins Todd & Ty McNulty to Tara’s Dil Pickles in Rugrats…you get the idea.

So let’s give a warm brony welcome to Grey as she joins Nicole Oliver, Peter New, and Gail Simone among our Guests of Honor, with many more yet to come. You’re not going to want to miss this rare chance to see another star of this magnitude at our little soirée by the Bay.

Register now, then book your hotel room, and prepare to blast off with us this coming April 10-12 to BABSCon…and BEYOND!

BABSCon 2020 Goes to the Peter New-niverse! 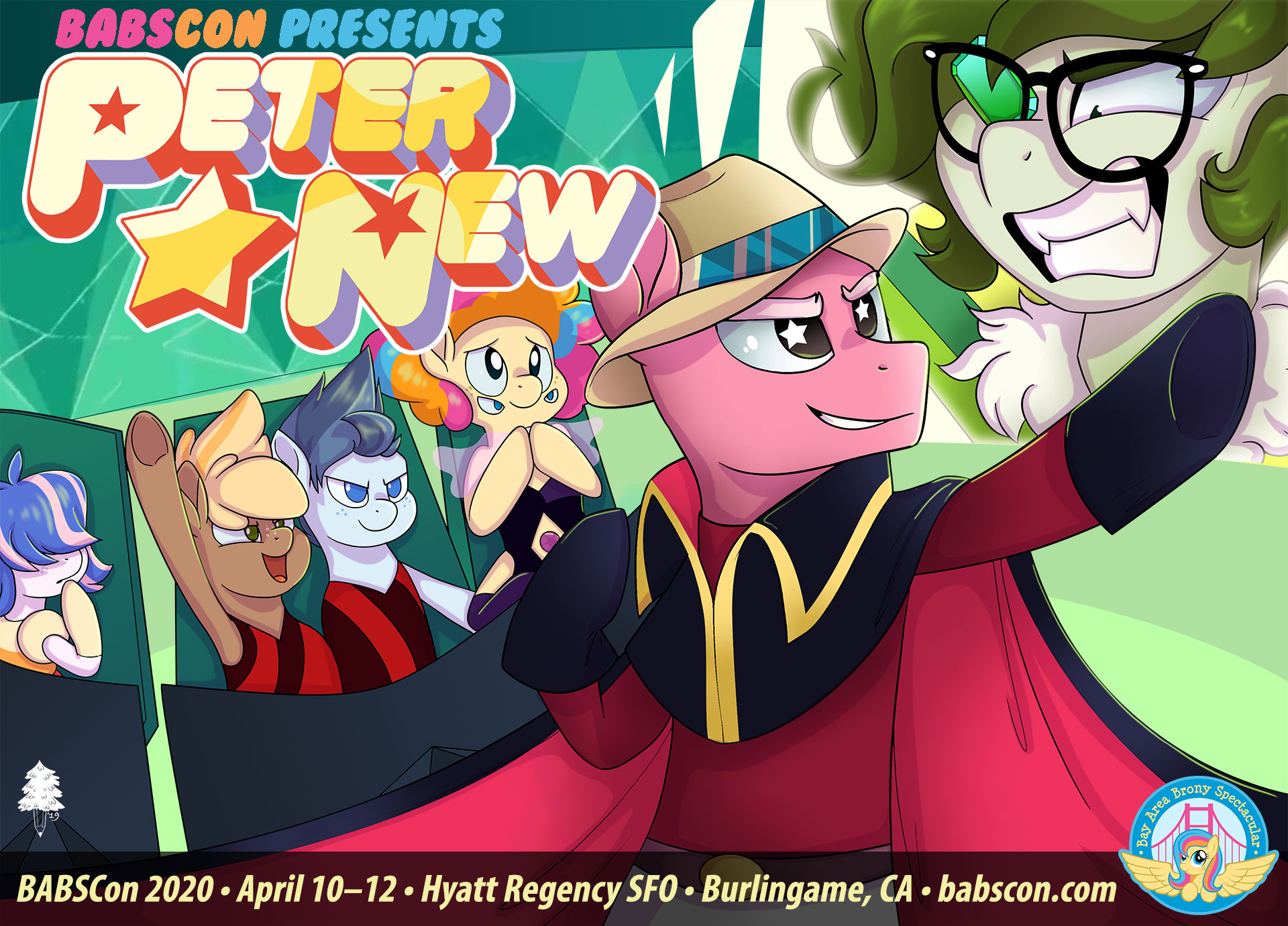 Times like these call for a stallion of action. A stallion of few words, sage wisdom, and great strength. A stallion so secure in his masculinity that he would think nothing of going to a picnic in a gorgeous dress with the most fabulous beehive mane and impeccable glamor makeup just to make his sister happy…or at least the talented man who plays him. Eeyup! Peter New is making his triumphant return to BABSCon!

In addition to playing Big Macintosh, Doctor Hooves, Goldie Delicious, and many more on My Little Pony: Friendship is Magic, Peter has voiced musical monkey Sunil—and almost 70 others!— on Littlest Pet Shop, and appeared in Megaman: Fully Charged, Inuyasha, and most recently, Ninjago. His recent projects have included the multi-award-winning short film, WoodMan, and the podcast/radio drama, Voyage of the Oeverwal.

Peter joins Guests of Honor Nicole Oliver and Gail Simone, plus further guests soon to be announced—follow us on Twitter, Facebook, Instagram, Tumblr, or our web site to get the news as it happens—as we send BABSCon past the ionosphere…AND BEYOND!

BABSCon 2020 Gets Celestial with Nicole Oliver! 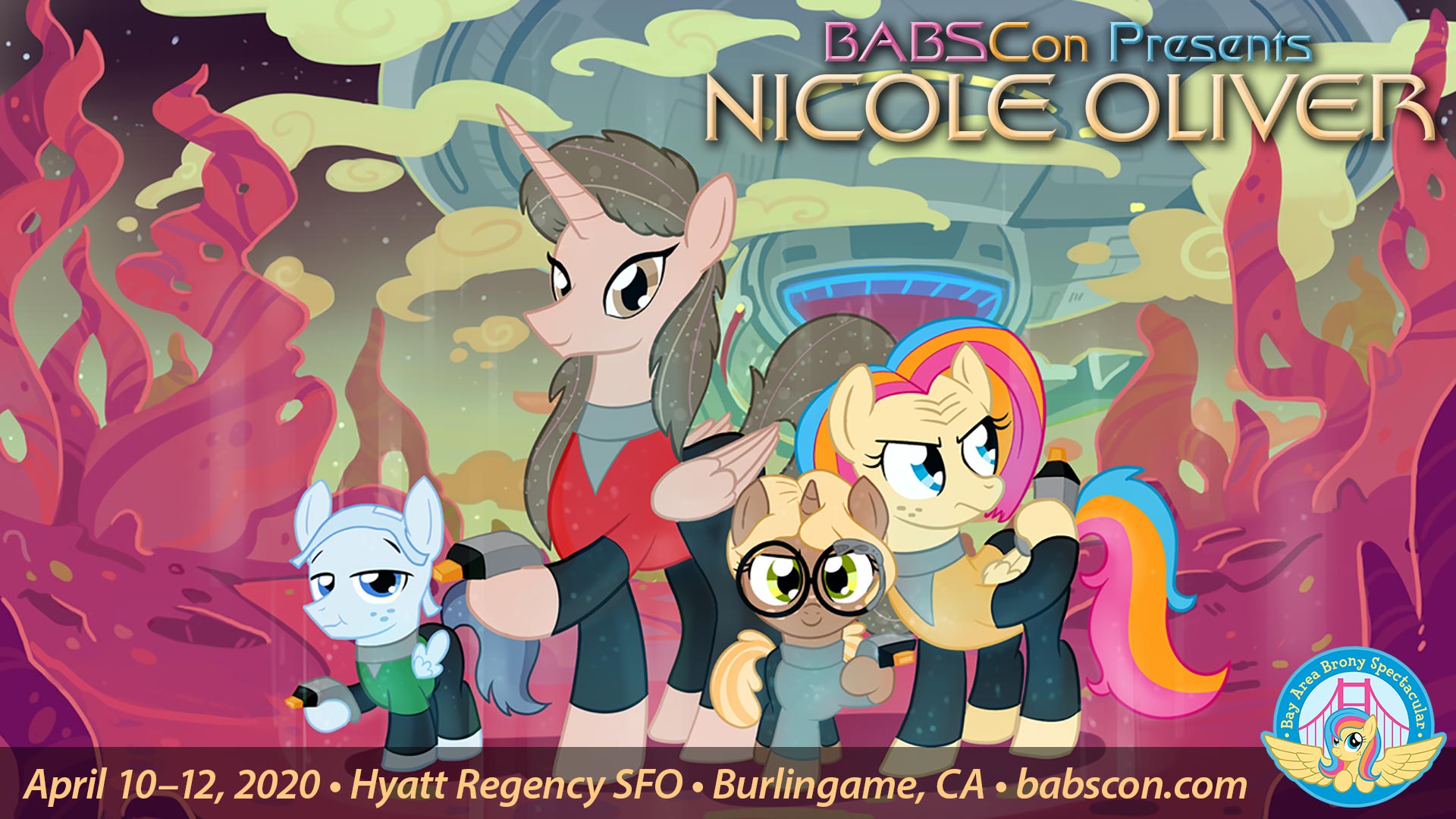 She raises and sets the Sun. She sends ponies to the moon! She journeys to inner space when not hugging trees, and broadens the mind-space of all Ponyville’s fillies and colts. Actually, she doesn’t do any of these things, but the characters she voices do because she’s the radiant Nicole Oliver! And if anyone embodies the BABSCon 2020 spirit of “…AND BEYOND!” it’s her.

To fans of My Little Pony: Friendship is Magic and Equestria Girls, her sultry voice is instantly recognizable as Princess Celestia, while her talent and skill allow her to become beloved teacher Cheerilee and the nature-loving Tree Hugger, among others. She also starred as purple pooch Zoe Trent and so many more on Littlest Pet Shop, Sally & Miranda on Transformers: Energon, and lent her voice to a variety of characters in the Barbie and Ninjago franchises. But that’s just the tip of the iceberg!

Nicole joins the writer who sent Celestia and Luna ziplining in “Between Dark and Dawn,” Gail Simone, among our Guests of Honor. Needless to say, we’ve just gotten started, so watch for lots more announcements.

So don’t miss out! Go register now—and don’t forget to book your room—to join Nicole Oliver and all of us at BABSCon as we take you to the stars, AND BEYOND! 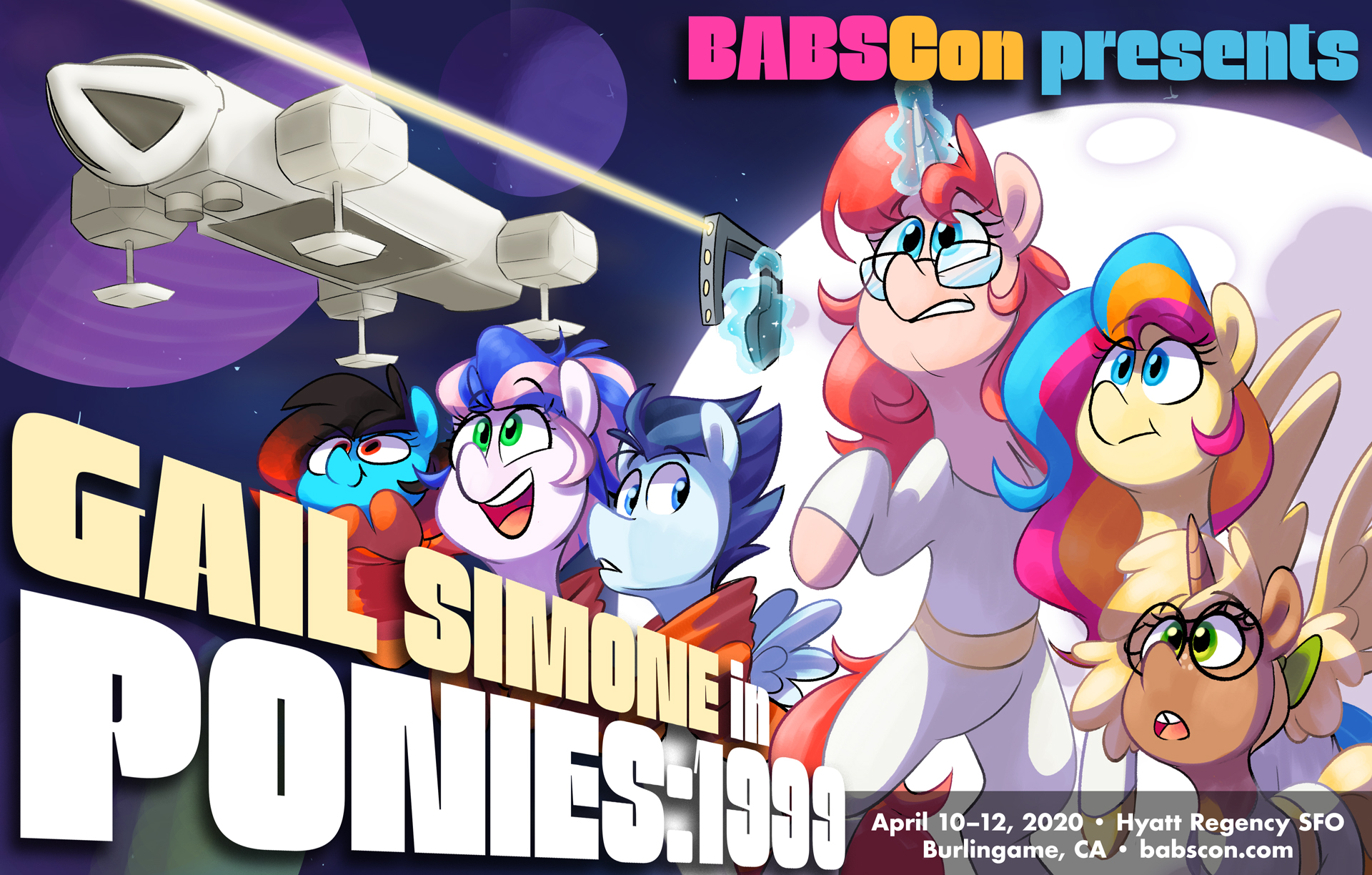 We’re starting off our Guest of Honor announcements for BABSCon 2020 with one supernova of a guest star. Of course, not all big guests on an animated show are voice actors…sometimes they’re writers. Writers like the amazing Gail Simone!

Gail wrote one of Season 9’s most beloved episodes, “Between Dark and Dawn,” which finally gave us the Celestia & Luna-centric story we’d always wanted. And, while she has other animated credits, including episodes of Justice League Unlimited and Batman: The Brave and the Bold, it’s in comics where Gail is known as a goddess.

After rattling enough comics industry cages with her Women in Refrigerators web site in the late '90s, Gail took up the pen herself to show them how it’s done. This resulted in runs ranging from merely “beloved” to downright definitive on little indie titles like Wonder Woman, Deadpool, Batgirl, Birds of Prey, Red Sonja, Secret Six, Plastic Man, Domino, Welcome to Tranquility, and so…many…more.

Additionally, Gail’s Twitter feed has been known to cure boredom, depression, snark-deficiency, and the desire to quit Twitter entirely.

So have a tin of crypto-ham, heat up that tea in the American style—with a kettle, unlike those beastly Brits with their microwaves—don’t let Gambit narc on you, register now, and book your room to come see Gail Simone and all our upcoming Guests of Honor at BABSCon…AND BEYOND!